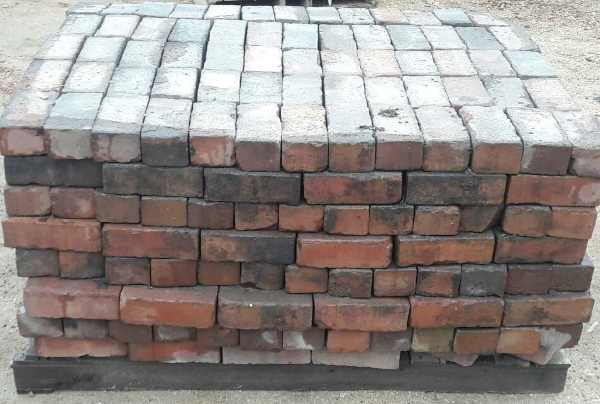 In the second half of the eighteent century, a brick paved street was a sign of an American towns prosperity.  A second rate or rural town might be referred to as "dusty", a term derived partially from the idea that a less developed city would be one with dirt roads.  Indeed if you go back and look through old newspapers, you will find that the introduction of brick paved streets was celebrated nearly to the same level as the electrification of a city.   These paving brick were especially hard, with a mix of clay and shale, and they hold a high iron content.   These pavers were fired to the point of vitrification, and this produced a brick that had nearly zero absorbtion, and could stand up to the abuse of hoof and wagon, and later motor cars.  So much so, that the nations premier auto race track was built entirely of these pavers, and the "brick yard" at Indianapolis motor speedway still sports a strip of the original pavers across it's finish line.

There were manufacturers of these street pavers throughout the midwest, with street brick being made in Ohio, Michigan, Indiana, Illinois and Iowa.   The brick produced was of varying quality, with the product out of the Purington Brick yard in Galesburg IL particularly heralded for its durablitly and deep red color.

The paving brick industry declined rapidly after the development of asphalt in the 1930s.   But the last 50 years has seen millions of these antique street brick salvaged and reused as old streets are torn up for utility work or repavement.  Colors include shades of brown, red and burgandy , and many of these were stamped on the sides with the names of the manufacturer.  So bricks marked "Poston", Metropolitan, "Alton, "Purington" and many others are still valued for their durability and old world charm.